Tat On, with Confidence and Hope,
Through All Crises*

Once upon a time, far, far away in a little corner of Tat-Land, amid the Maple trees, a saddened tatter sat woefully gazing at a small, pretty motif.

"I suppose it will be nice sewn onto a young girl’s shirt," she thought, "even if I feel such a failure for giving up and not battling through the pattern."

She told all her tatting friends that she was wiser now and knew exactly when to stop, knowing her temper and repertoire of language filth was legend in the Land.

Frustration for Fox meant things suddenly shattered as they collided with a wall to the accompaniment of nasty, blue trucker-talk.

Her friends applauded her newly-found common sense, and all agreed it was for the best.

All, that is, except the Audacious Aussie from Down Under: Liyarra.

Liyarra told her it was not all right to give up; give in, yes, but not give up. 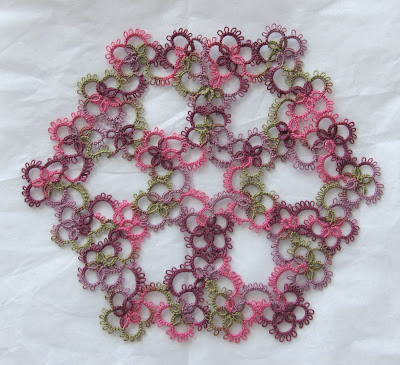 Grateful thanks were sent to Liyarra, who had sent such an important dictum over great distances.

Fox was happy with her tatting conquest and her shuttles smiled upon the pleasing result.

*Borrowed from Elizabeth Zimmerman, the Grandmother of Western Knitting