I said I would accept the challenge. So, I am trudging on.

This is as far as I am, and the  Monster is now languishing, untouched for days.

Ah, the difficult decisions of a dedicated but slightly demented tatter... 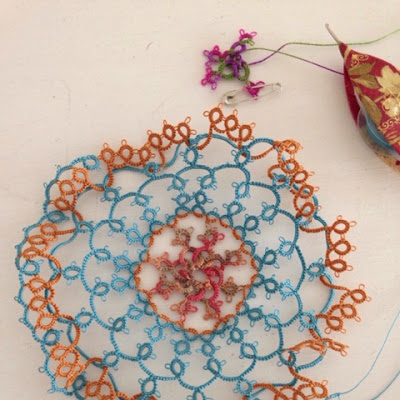 A Huge Apology To Jane!

An admission... I have been harbouring the thought that Jane McLellan was an evil tatting sadist. Yes, I really held tightly to that nasty little meanness for about three entire weeks.

I was certain I could not meet the challenge Wendy and I had agreed to tackle before we were joined by other eager tatters, game to produce Under An African Sky - Jane's original design.

Imagine my disgust when I could not complete the first round. Over and over I tried and even attempted to adapt the pattern to avoid the overlapping rings. As it was, these rings had frustrated me for a good half year. Plus, I am using #80 thread!

Many hours and a good deal of thread have produced nothing but dismay. The Monster was neglected. Meals were skipped. I raged.

WELL! I have completed the centre correctly!

Dyslexia be banished! Apologies to Jane! Hugs to my shuttles! Joy!

Happiness had me ordering a new LaCossette shuttle to celebrate! This was big.

The downside to all the good cheer is that there are SIXTEEN more of these ahead. However, I  think I now have the procedure committed to memory. I can only hope... 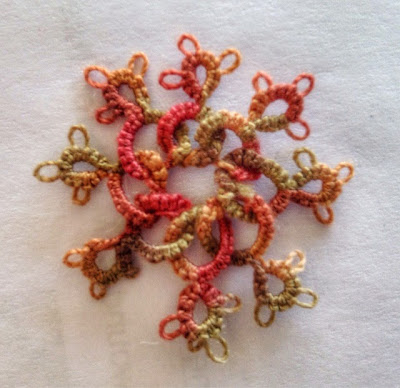 Thank you.
You are all probably very right! : ))
The thread is in the mail. 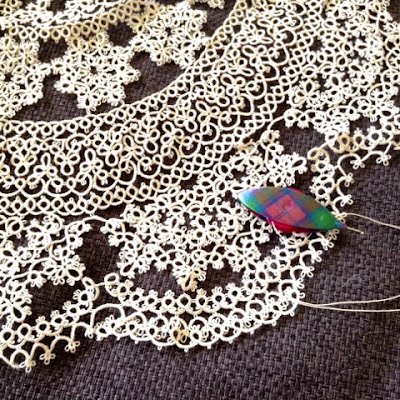 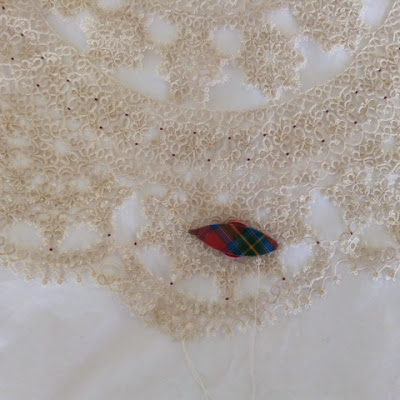 I am more than half-way through round fourteen -  in only a few days! Then only four rows to go!

There are just two balls of thread left of the original eight, and I am a little anxious about running out That anxiety causes me want to tat very fast, so I won’t run out of thread! Logical, eh?

So, I have to be extra cautious that I do not tat overly fast or I will be unpicking constantly from now on  till the end.


Before I bagan this row I tatted
Robin Perfetti’s Snowflake again,
this time in #80 DMC. 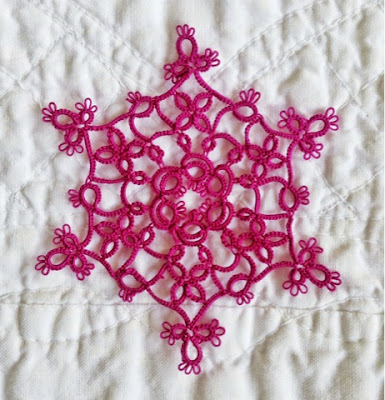 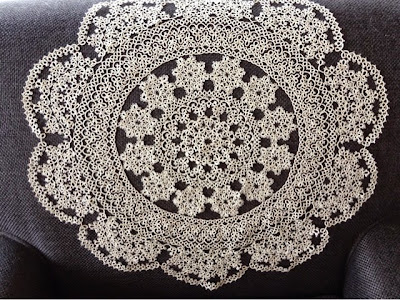 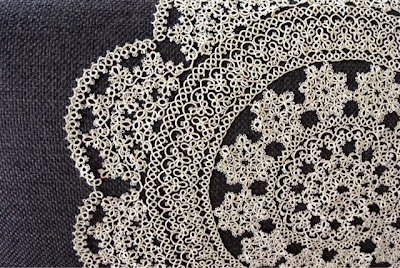 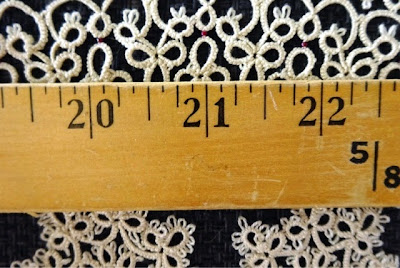 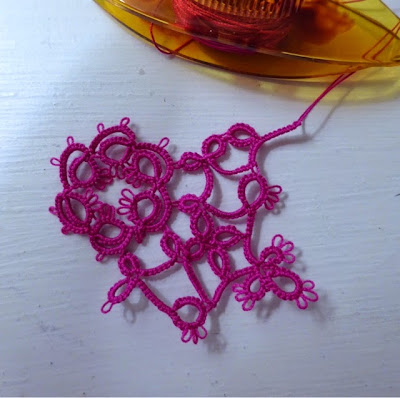 LATER
Finally on the last repeat of the round on the Monster. Next row ahead, : ))
Posted by Fox at 1:10 PM

Similarity To A Snail

It will not be done for weeks, as each row now takes a lot of time. Still taking it slowly and not rushing. Keeping it slow takes away frustration and the crazy desire to rush!

This row is the last with beads. Thank goodness.  : ) 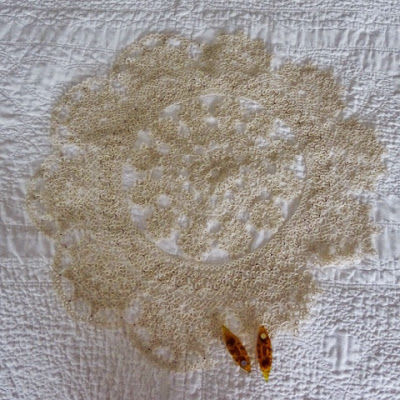 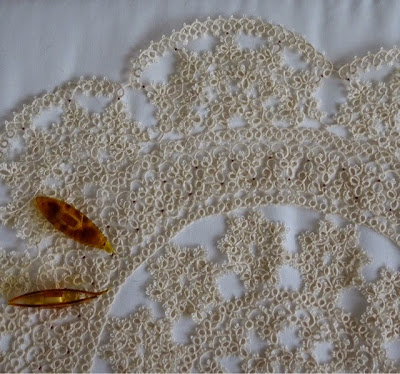 Rollin' With A New Round

Finally! Who hoo! I am one happy tatter now that I have left those wretched repeating motifs in the dust! This big d... Is now over 19 1/2 inches in diameter! LARGE!

This row is straightforward and so comparitively easy, even with the addition of the #11 beads (a gift a million years ago from Psychomomom). After this row I am finished with beads, but I needed to tie in those in the previous rows. 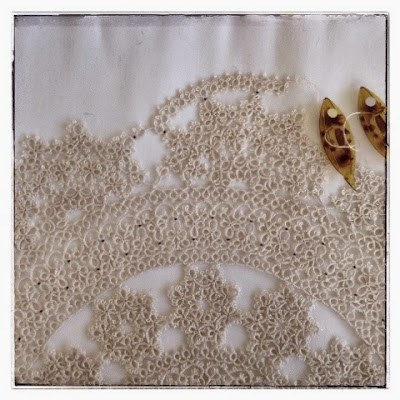 Now, a confession. After seeing how umintsuru tatted the interlocking rings of Under An African Sky, I realized I might not have been doing them correctly when I trudged off in my own direction. As usual. So pig-headed.

So, I think I will start over - following the pattern this time. No beads. Whew! Also. I was not thrilled with my colours and have picked different ones this time. Eventually, I will get started. Thanks, umintsuru for the photos on your blog. : )

This is how far I got. It was good therapy as a change from the Monster. 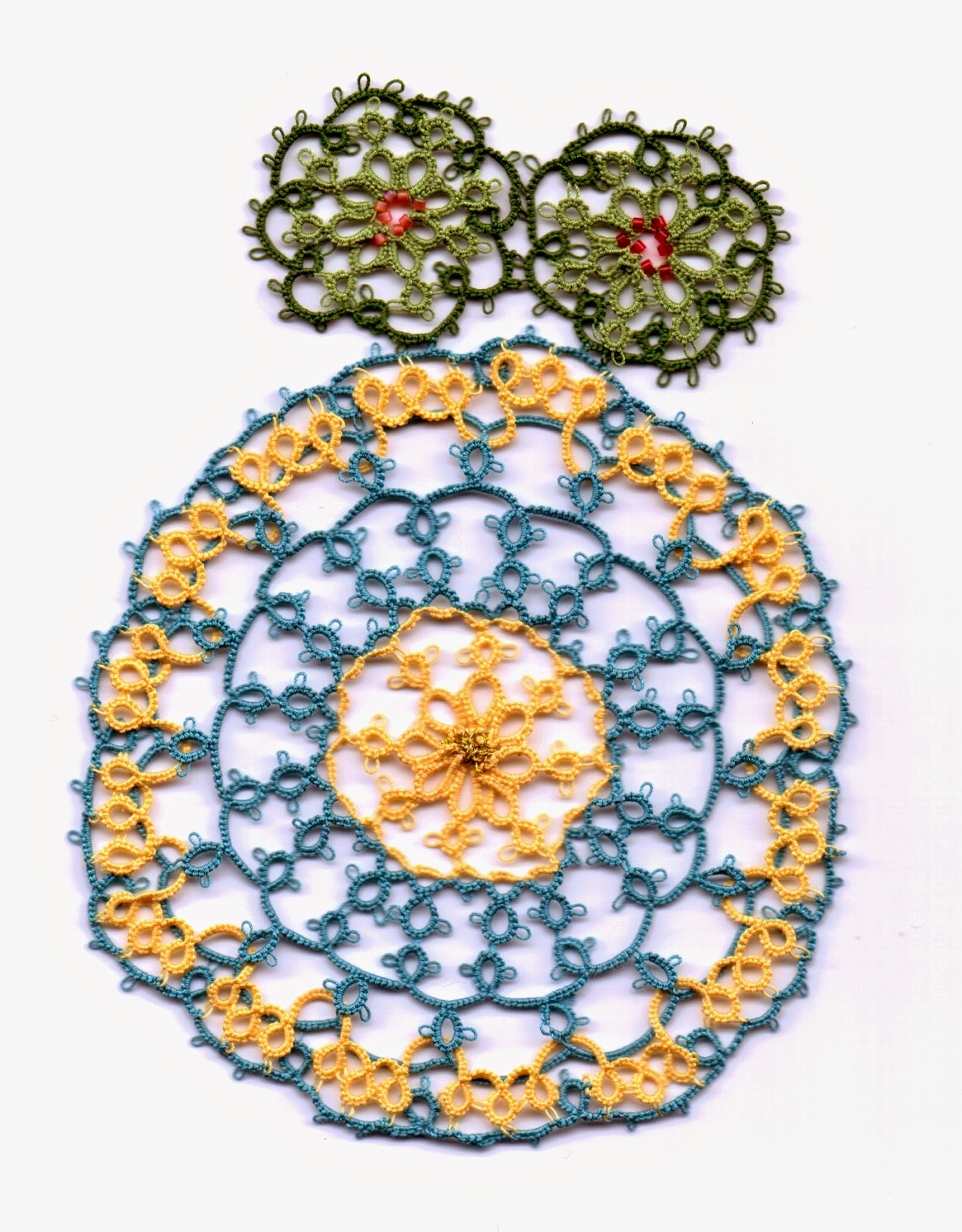 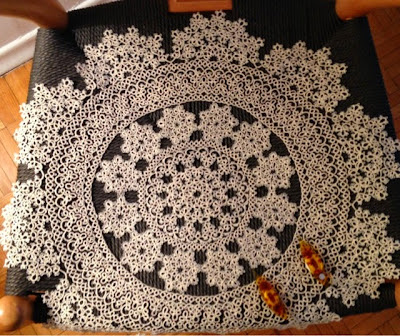 Ohhhh, I am getting more than fed up! I am just finishing the last motif of this round which took longer than it needs to, as I am also paying with Under An African Sky - for the sake of sanity.

Now it will not even fit on the chair, but I have not yet re-measured it. Considering it is tatted in #12 Perle, it is pretty darned large. 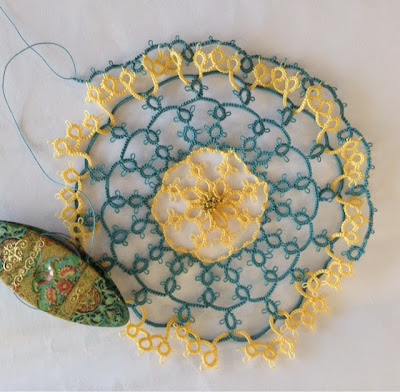 Lovely pretties in the post from Frivole for me,
and from Marta for me and The Boss! 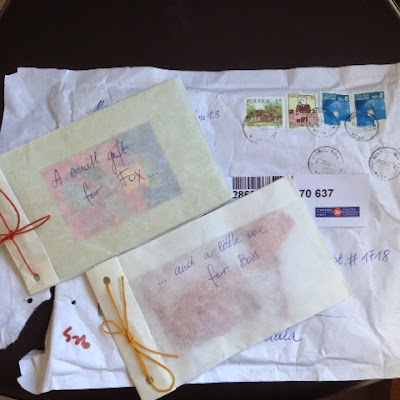 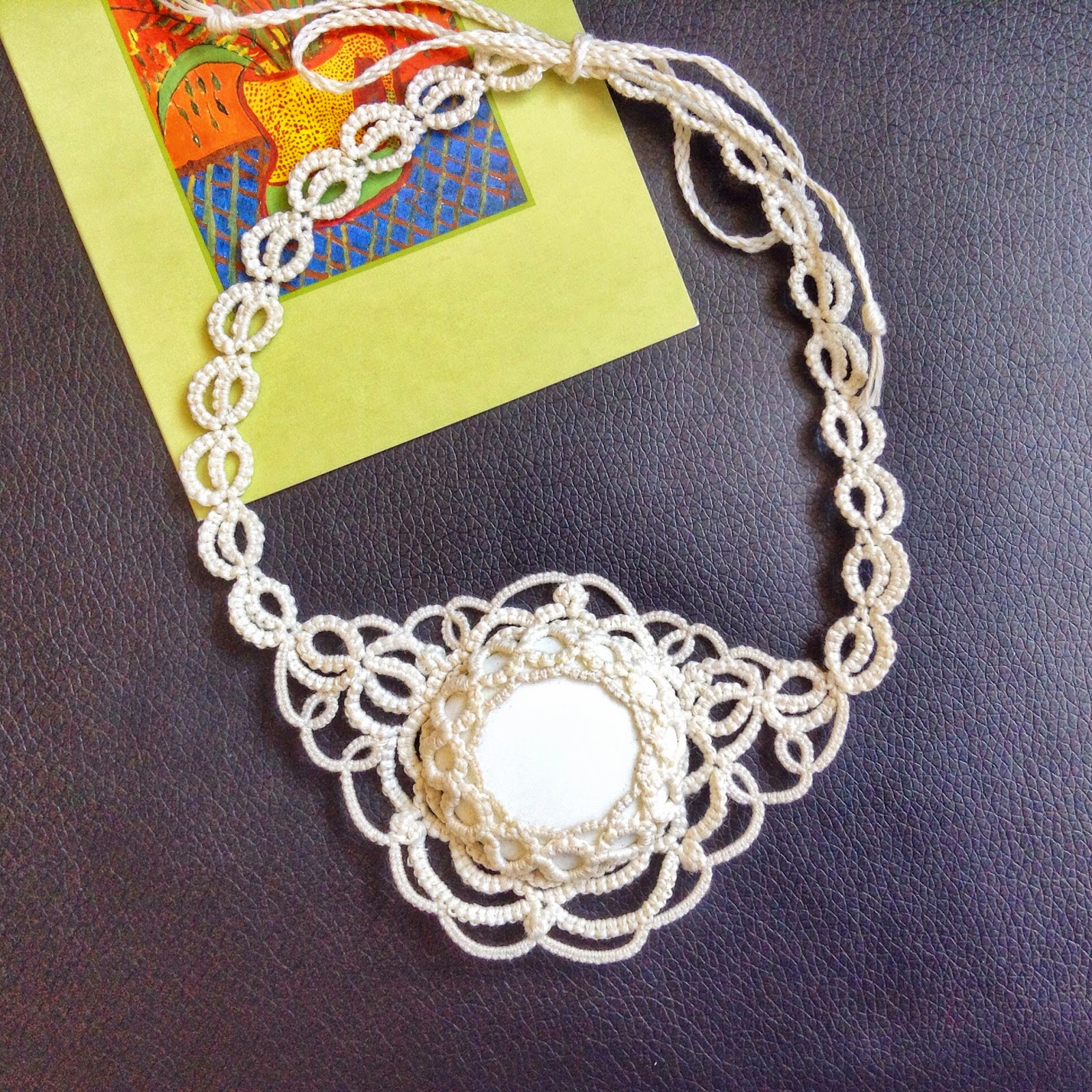 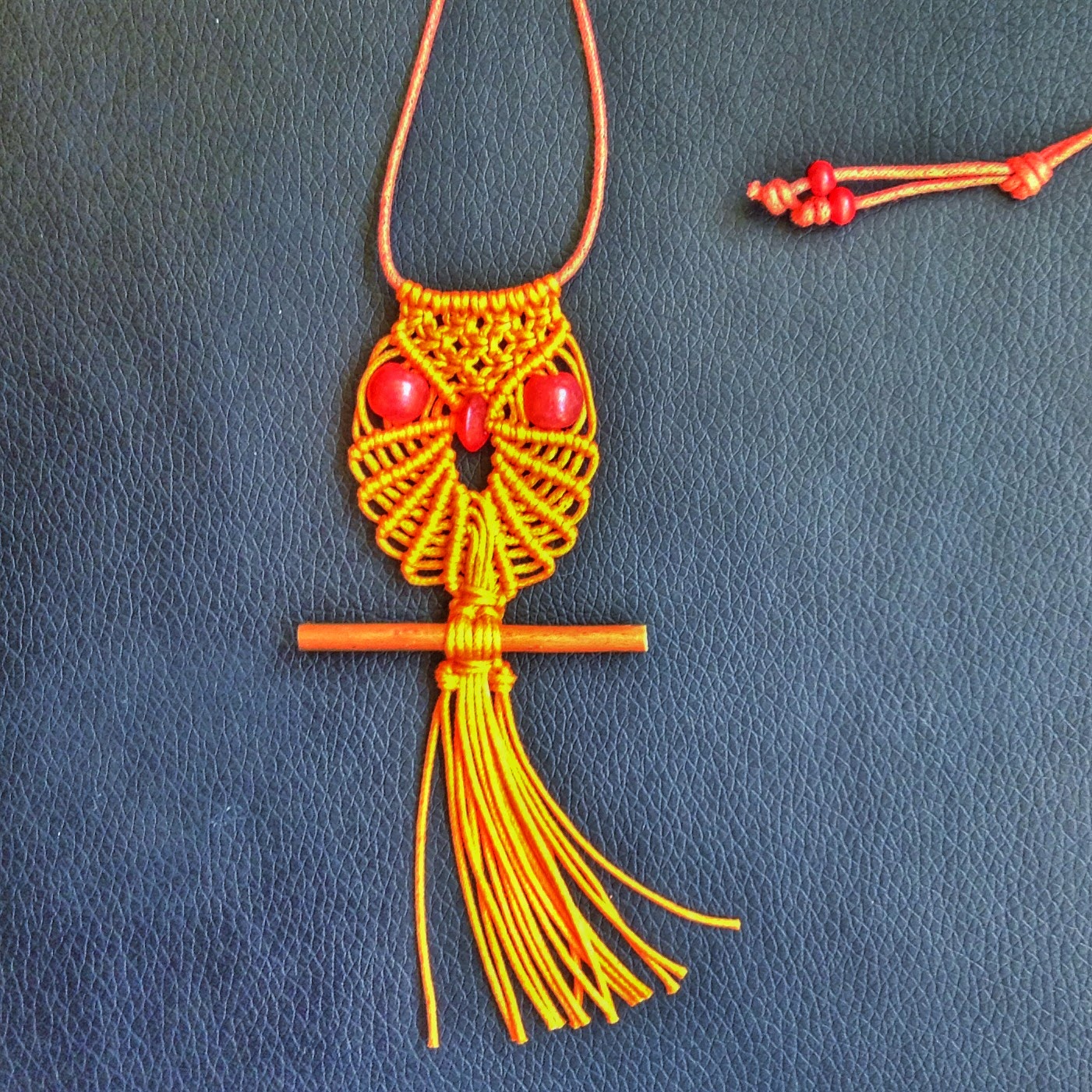 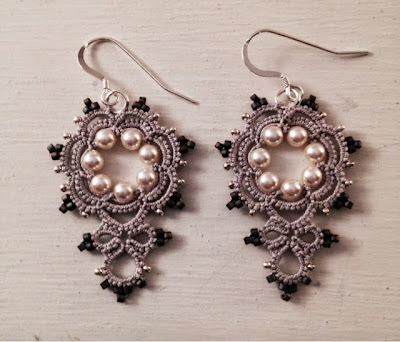 AND lucky Mr G,
who received mail from Kos, from Auntie Margaret! 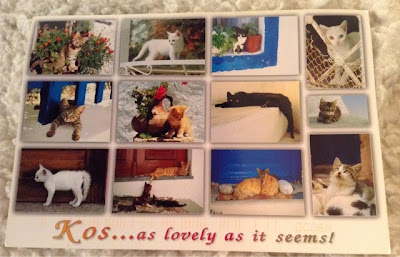 What do I have to do? A red ribbon does not win him over.
In fact it might just annoy His Majesty: 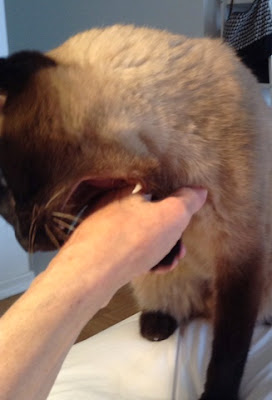 It took a wee bit of coaxing, but he came round in the end: 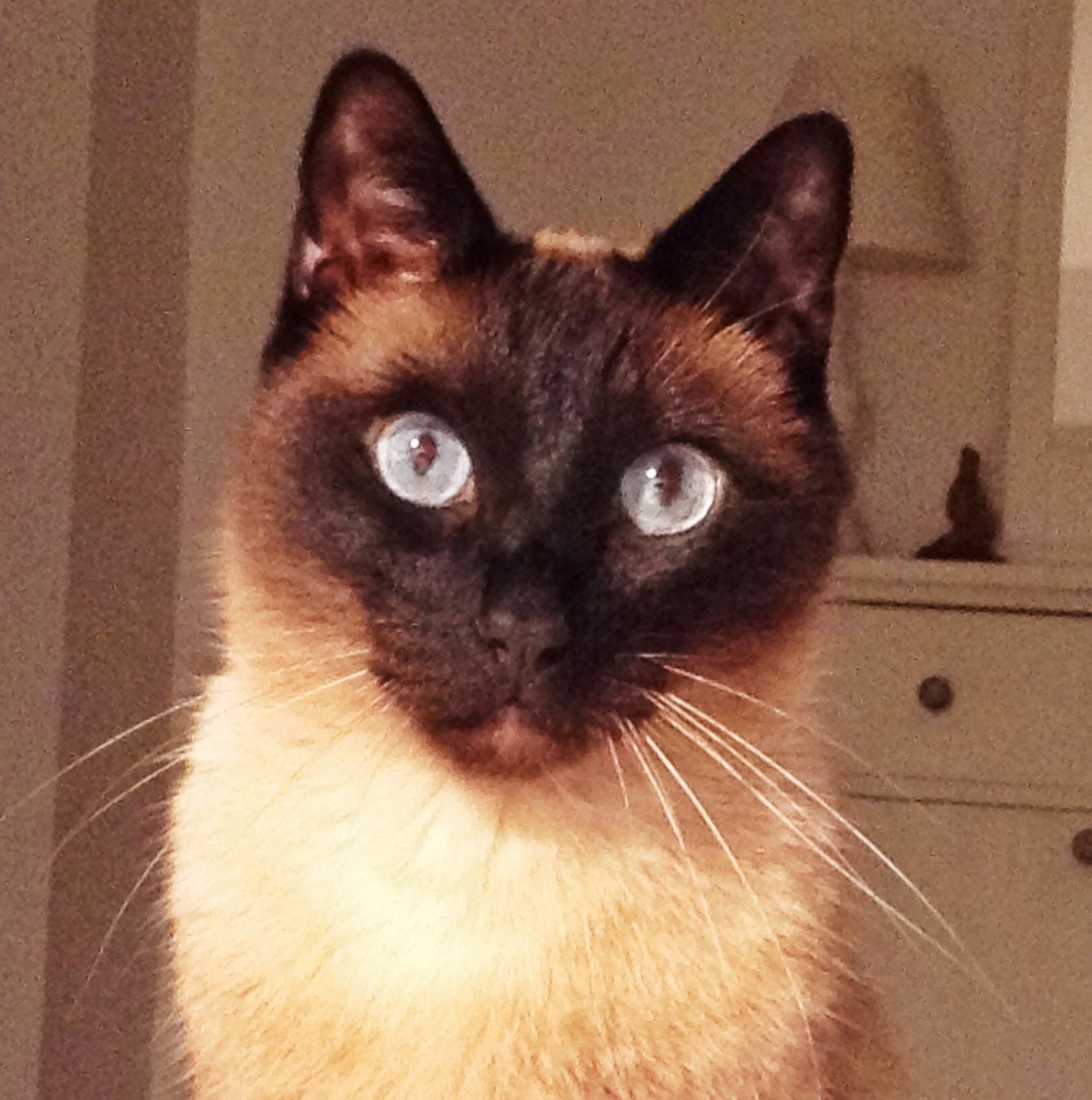 Probably, I was too immersed in shuttle-activity,
as I began the Under An African Sky Challenge,
which I have revised, with apologies to Jane McLellan: 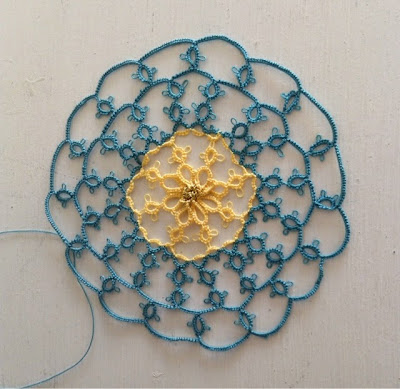 The overlapping rings do not work for me. They look all forced and do not flow. Actually, I rarely see any in Tat-Land appealing to me - just not a design element of which I am fond. So, I took the liberty of doing my own thing.


Update on The JS Monster D...

I am still trying to complete the same round I was on last week. Two more motifs to finish and then into the final three  or four rows, which are much more straightforward. Thank goodness!

It is becoming very unwieldy; I’ll be glad to finish it. Although I am pleased that I decided to tat this pattern, the Monster D is the most patience-challenging project I have yet attempted. Next post: an update photo.
Posted by Fox at 12:41 AM

A red ribbon in Canada is first place.
The blue ribbon takes second.

Proud me! How I love red. 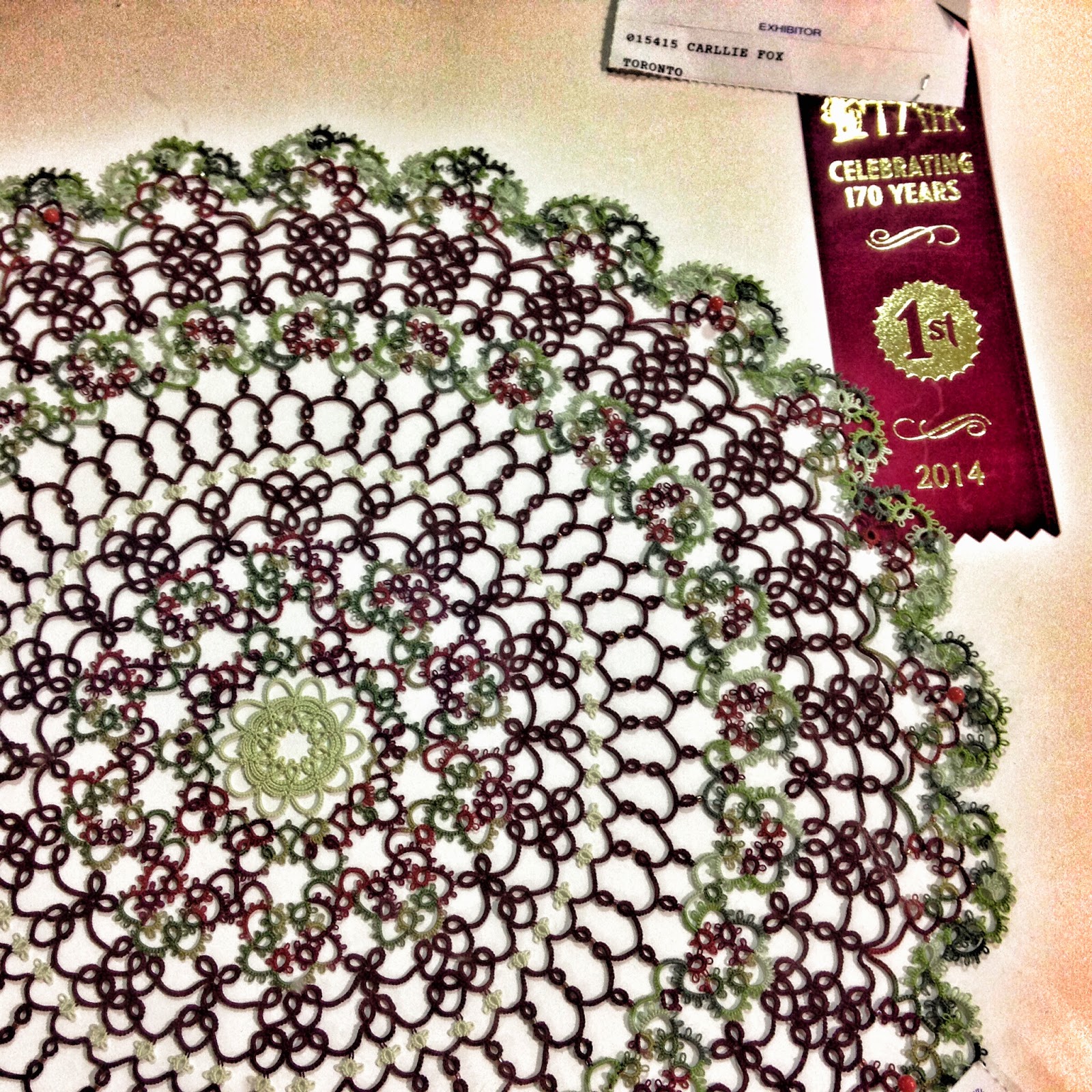 Dreadful photo as it is from my iPhone, taken at the fair,
where the piece was in a display box.

It will remain with the fair folks, for it will be displayed
at another event in Toronto in November. : ))