The Beastliness of Boredom

You know how when you sometimes cut out a mistake you cut into the previous row as well?

You know how sometimes when you tat a few repeats in a long row you realize half way around that you have made a mistake in the pattern?

You know how you repeat that same mistake the next time you tat that row, after you have cut it and started again? Twice?

You know how you repeat that error yet another time? 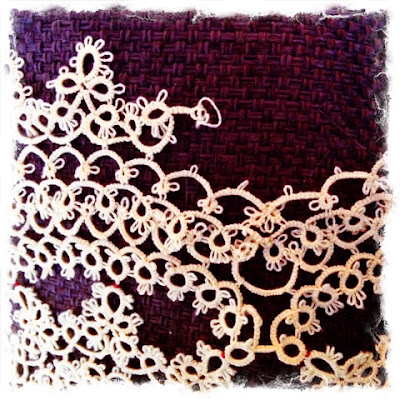 After recovering from the shock,
I fixed the row below and proceeded with the repeats.

Luckily, I have heeded Maureen's warning - one of quite a number - to re-order a couple af balls of thread so I don't run out. I seem to have wasted a lot of thread trying to get going on this very annoying row.

Finally, I have got the pattern and the starting part right and have completed three repeats. There are ten, so only eight more to go and then it's on to the final round.
Posted by Fox at 12:21 AM 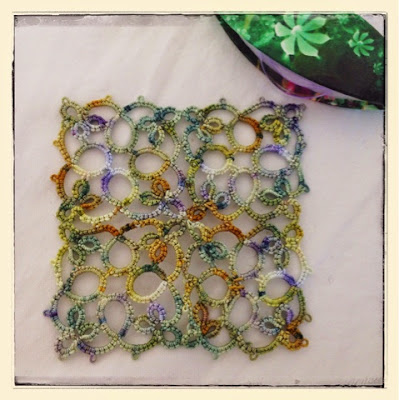 Karey Solomon is a very prolific pattern producer. I enjoy her quirky patterns very much. This square was very satisfying to tat, especially using Karey's own HDT, #40, which is a Lizbeth thread. Nice change from DMC perle.

A certain somebody had an odd reaction to the booklet. I'm still bit uncertain what he was saying! Perhaps just sending belated birthday greetings to Uncle Vernon... 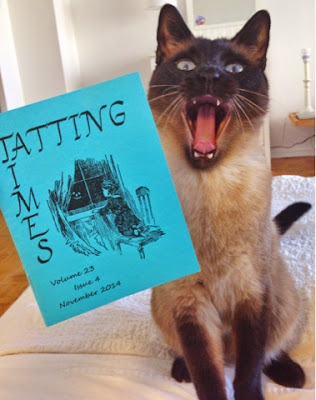 I wasn't going to post about the Monster again till it was done, but I LOVE the word penultimate, and really, when do I get the chance to take it to lunch?  : )

So, here I am; actually several inches beyond this point. I am hoping I might have this completed by the holidays. Ideally, would like to give it to my daughter-in-law before the new year.

This motif is from the DMC Festive Tatting book. 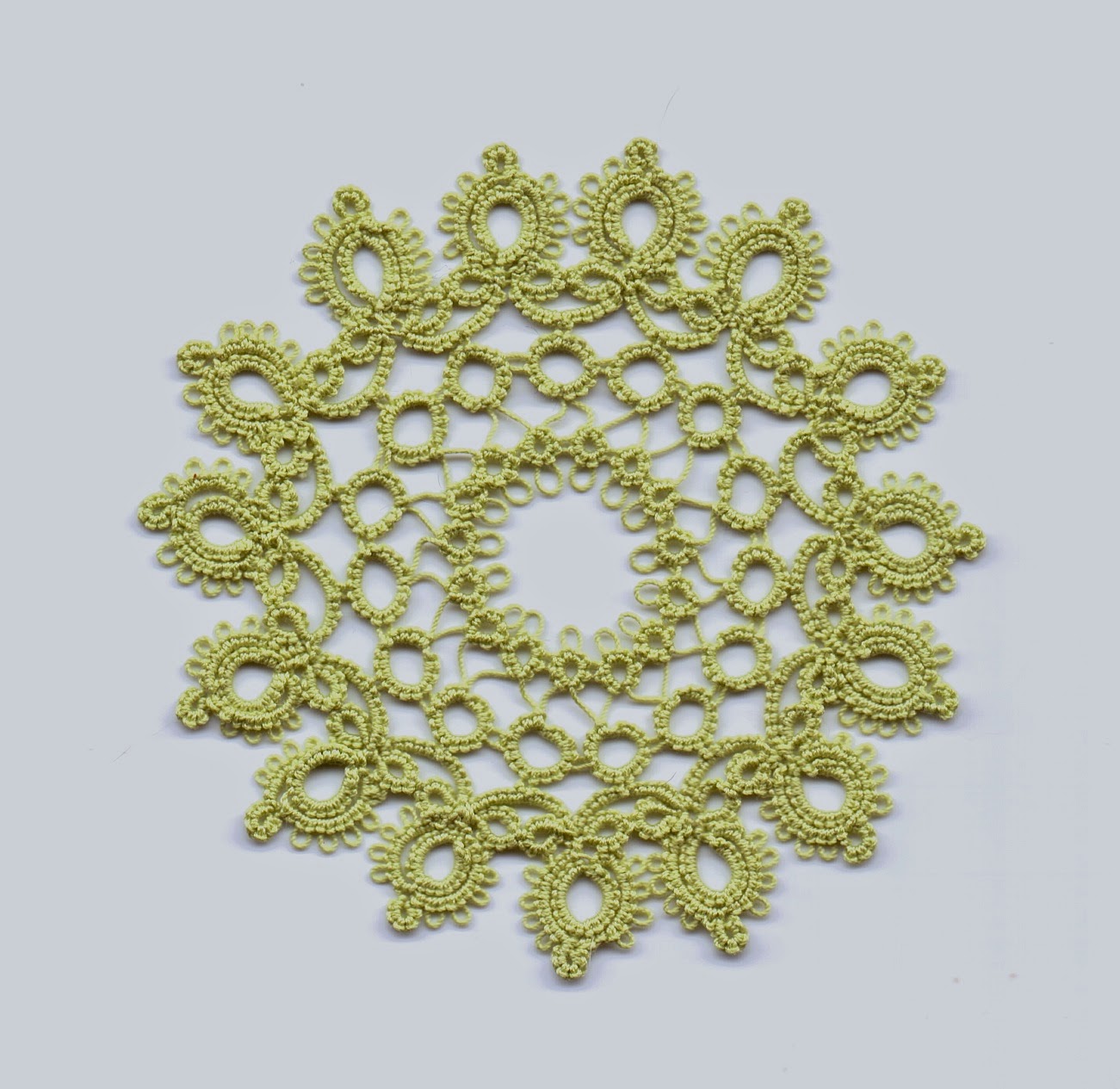 Frivole was right - it is difficult to avoid “gaposis,” and there is an unevenness that occurs in the pattern going from one repeat to the next, and at the top of each onion ring where there is a small ring, and once again in the final ring of each clover.

As Frivole suggested, I added a half-ds to the small ring on top of the onion ring, so it would not be lopsided. Then I added two at the end which made it even better - good tip for anyone tatting this motif.

I tried a number of solutions, from SLT to an extra join here and there, in an attempt to accomplish a pleasing symmetry, but just could not come up with a workable, consistent solution.

In spite of the difficulties with this pattern, I do like the end result.

The thread I used is #40 Lizbeth. I have 2 almost-finished balls of #40, and it was a nice change from the finer threads I have been tatting with for months.
Posted by Fox at 11:01 PM

Many have seen the disturbing news about CBC celebrity Jian Ghomeshi. Unfortunately the "Q"  star's name is pronounced the same way as Mr G's previous moniker.

Be it known that GiGi or MrG or simply " Shrub" (yes, as in small tree!) prefers to ditch the old name. Tally Tatty suggests a re-baptism! We of our faith do not have this custom, but consider it a fait accompli anyway!

MrG, GiGi, and Shrub thank you for your consideration. 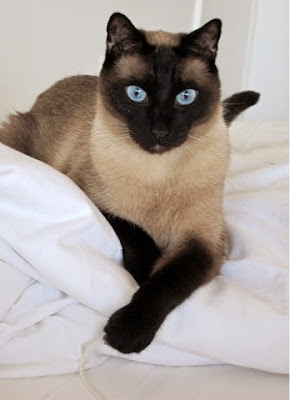 I saw an interesting pattern on Frivole's blog, and because I feel as if I have lost all ability to tat anything beyond simple rings and chains (Monster Madness) I thought I would try it. Not finished but looking okay. I like it. 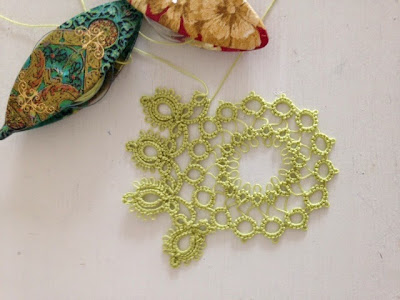 It is fiddly and I think overly complicated in the way it is written. So, I followed Frivole's lead and made my own pattern. Well, actually I am sort of just improvising as I go.

The pattern is from this book: 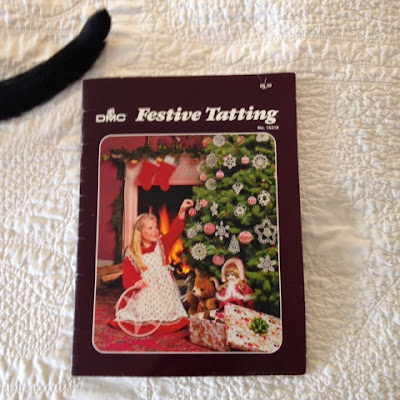 Ignore the tail please. He would NOT move. 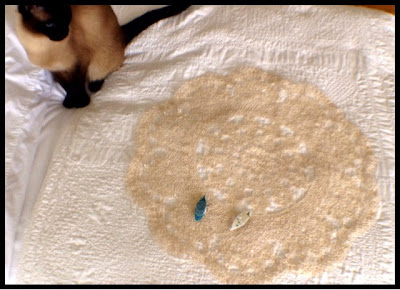 Just tatting on...and on. These posts are so boring, I know, but when I look over them I get a  feeling of satisfaction. Otherwise I lose perspective on this massive piece.

Thanks to all of you who have commented and supported me for months. Your interest and kind words have encouraged me no end.

Three more repeats on this round and on to the penultimate row. 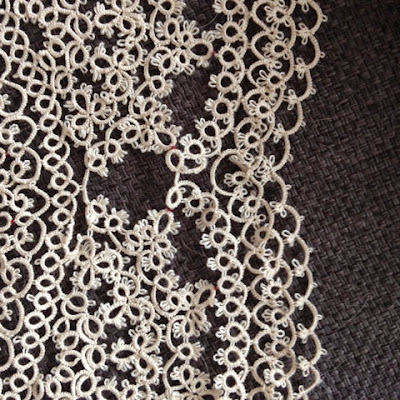 Third From Last Round

I think I miscounted - nice! 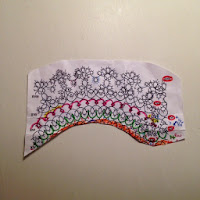 This row is the 16th and there are only 18 (ONLY!) rounds in the pattern. So I am closer to the end than I thought. 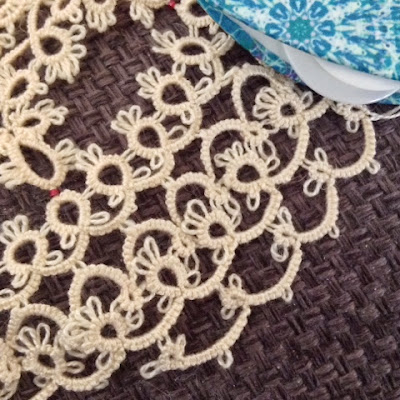 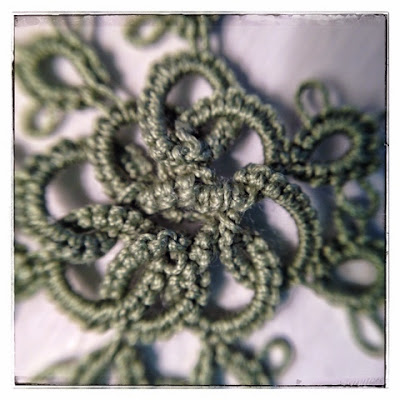 Interconnected rings...I have been practicing for months! Never getting it right. So frustrating. AND, I am using # 80 thread.

Today I went for a run in the rain and decided that the next motif for Under An African Sky would be a success, et voilà!

I think this will do. Only after reading Ninetta's blog over and over again, have I had the fortitude to keep trying. Merci beaucoup, Ninetta!

Do you suppose I shall be able to tat another? : ) 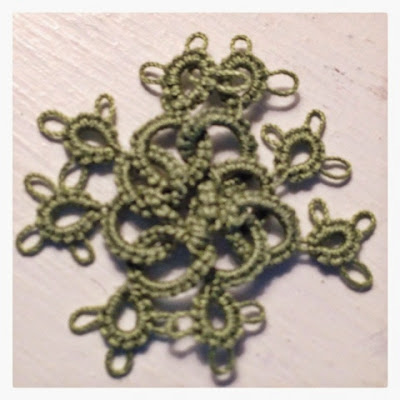 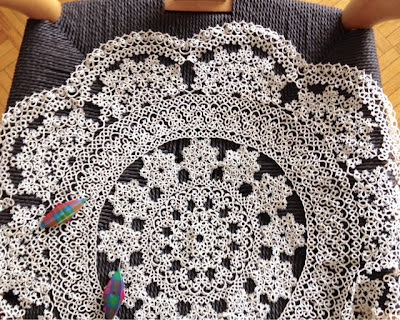 Half-way around this round.

It takes an evening of tatting
to do just over one element repeat.

The diameter is now just over 21 inches.