Humour In Spite of Sad Times

It has been a difficult time and she so wanted to leave weeks ago, but just could not do it on her own planned schedule.  She determined that you just cannot bargain!  "The Joker always wins," she said a few days ago.

That was so my mum - wry humour till the very end.

Mary Konior has kept me relatively sane the past few days.
Here is a good one for times of stress. 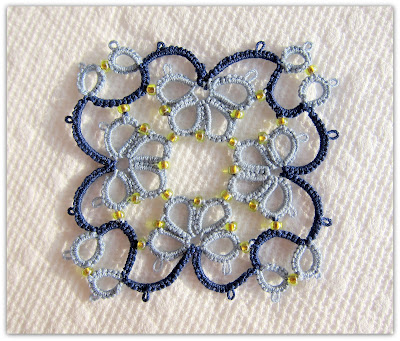 Here Is The New/Old Heart For Misha 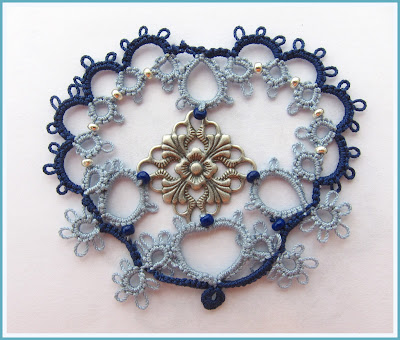 Thanks to who gave me solid advice.  I have listened to what you had to say, and have this to show for it.  I like it and am writing up the pattern now.

When it has been tested I shall release the heart to Tat-land and * blush *  ahem.... admit to wanting to be a designer of tatting when I grow up. It has take me over 12 months to get from the first heart to this one with a written pattern. Ah, confidence... so elusive!
Posted by Fox at 8:35 PM 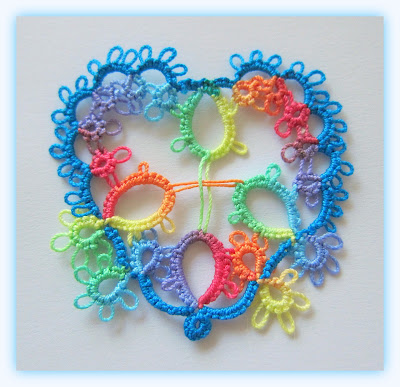 This is my recent update of a pattern I designed last year, this one:

I realized that if I wanted to make the pattern available I would have to write it without the do-dad in the centre and so I put off trying to tweak the pattern. 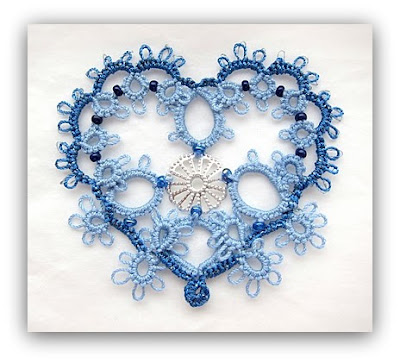 With mom in the hospital, I have been working on the design of the little heart and come up with a way of tatting it without the metal centre. 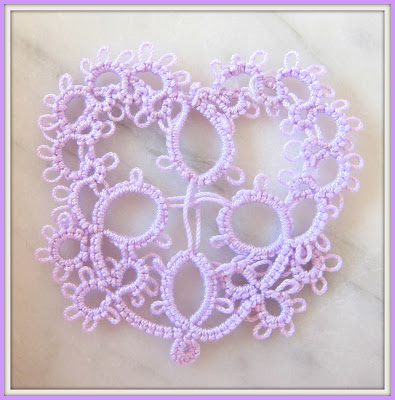 Is anyone out there interested in this pattern? I need some feedback as to whether I should go ahead...
Posted by Fox at 6:44 PM 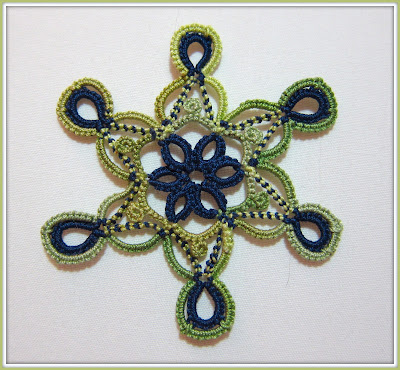 This is the most marvellous pattern.  I absolutely love everything about it. Plus, it is fun and satisfying to tat.

With the help of tatters who commented on the last post about the way I hold the shuttle and accomplish a DS, I have ALMOST got the action figured out so that I can use it comfortably.  Thank you Ladytats, Umintsuru, Michelle and Kathy for your input.  It really has helped.  I am still working on it...
Posted by Fox at 9:43 PM 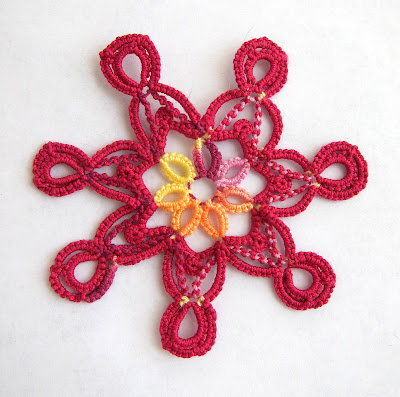 The current state of my life is not contributing to terrific tatting, I'm afraid.  Notice, if you will, the unintentional tatting of seven arms of the motif.  Ahem, sorry, Frivole! There are supposed to be six - I am tatting this again and in two solid colours this time.

Last go-around I used what was left on the shuttles as I was in a hurry.  Bad mistake.  This pattern really needs only two solids.

Do you undertand what I mean when I say I was putting the shuttle in the wrong place in the second part of the DS? I don't mean wrong, but in an uncomfortable position.

I have been looking at how other people tat as I was trying to figure out why my tatting action is so jerky, lacking a fluidity that I can not seem to attain.  So, I am trying it this way: 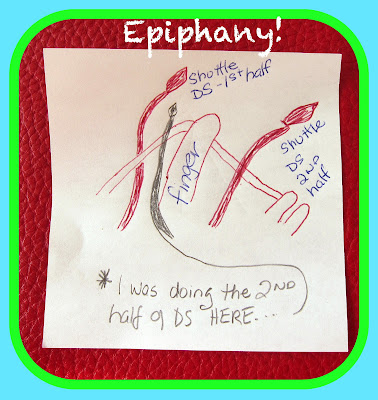 Anybody know what I mean here?
The new way seems to be smoother, but we shall see...

Thanks, Jess for the lovely package that arrived yesterday on the post. 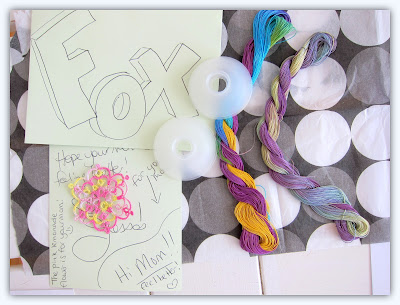 That little pink and yellow motif is now taped to the foot of my Mum's hospital bed...  So sweet of Jess to send that along.

I have some time right now to tat!  SO, I shall begin the next 'Minuet.' Hopefully I can get it right this time; plus, I like the colours I have chosen. 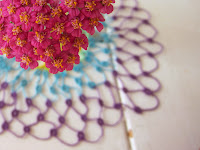 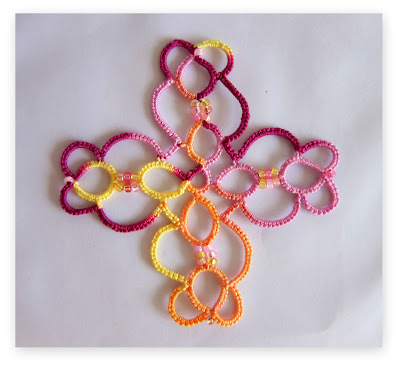 This is the square configuration of "Bubbles," from Julie Patterson's bookmark pattern.  So pretty - especially in Charlette's gift thread - #40 Lizbeth.

I love the Miyuki beads she sent with the thread; they are perfect. Merci, Charlette!
Posted by Fox at 10:23 AM

Man, it is hot in Toronto!  A full-on heat-wave.  The thread wilts. 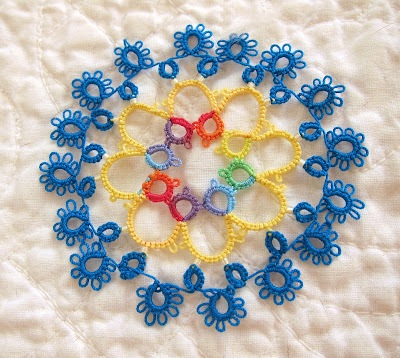 Not much tatting getting done as it is difficult on the home front these days.  But, I did manage to produce a pair of earrings, (without hooks) which is very strange as I never make earrings! I still had thread wound on the shuttles, and this is what happened. 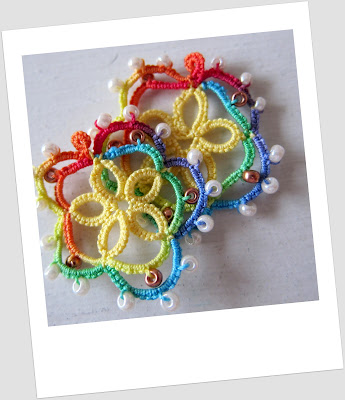 "I almost hate to be the first one to comment on this post, it seems that the first person and the last person are never chosen..." 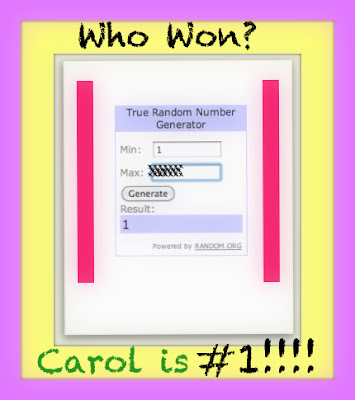 Truth really is stranger than fiction and I have the Random Number Generator to prove it!
Congratulations Carol!
You need to send me your address as soon as possible.
Thank you to everyone who participated.

From Across The Pond - Thanks, Charlette! 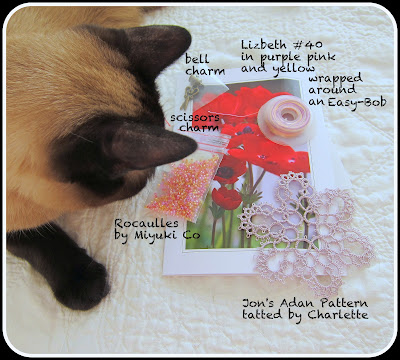 Yes, indeed! A BIG thank you to Charlette, whose name I saw on the package that showed up in my mailbox yesterday.  I was so busy getting things set up at Mum’s retirement home that I could not open it till very late last night.  When I finally pulled it from my bag at the end of the day, it added much pleasure to another very difficult day. Your gesture touched my heart, Charlette!  ♥


You can see that a certain someone is also most appreciative of the kind gesture...  : )

Another nice thing happened to me yesterday.  I WON the draw over at Pamela’s blog, here at Needle Tatting and Other Nonsense. I jumped at the chance to win one of this designer’s fabulous tatted pieces.

Pamela’s blog was one of the first tatting blogs I found back when I didn’t know the difference between a shuttle and a needle, let alone anything about something called a split ring or an HDT! I fell in love with her designs as I found them simple enchanting.  Go have a look if you do not know what I mean. She is the best!

Then, get this!  I hardly ever buy a lottery ticket, but a stranger advised me to buy one for the largest draw in Canadian Lottery history last week worth a staggering $50,000,000. I thought the words might just be a sign...

Well. I suppose they were, for when I went to check the numbers at the kiosk (I had already looked online and knew I had missed the big one, where I had a one in twenty million chance of walking away with the biggie) and the machine told me I had won something.  I was so excited!  Oh yah.  I won a free ticket.


The Universe sure works in strange and often wryly ironic ways!

Thank you!
You certainly made the last difficult week easier.

So, I found some thread gleaned from the old stasheroo, a .05 mini-hook, great for beading, and of course some beads to use with it. It is modest, as giveaways go, but carries with it a big bundle of appreciation. 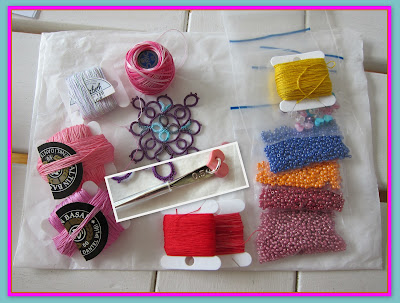 The End of Ends 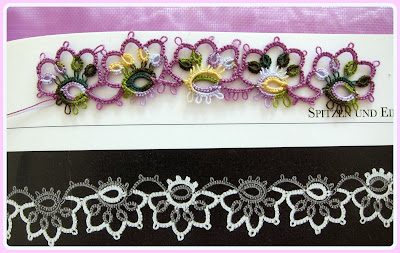 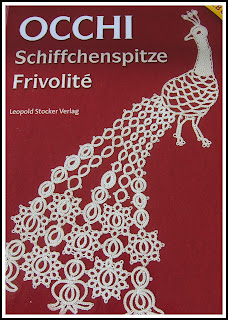 My Mum is home from the hospital and I am in the process of setting up appropriate care for her at her residence, so that she can remain semi-independent.  Thank goodness for tatting, as all this has been extremely stressful.

Many out there inTat-land know precisely what I am dealing with, who have also been grateful for the support of this fantastic community and for the solace that tatting provides during difficult times.

Funny how a simple skein of coloured thread and a small, plastic gizmo with a hook at the end, decorated with a pretty floral pattern, can provide so much relief. These past weeks, my shuttles have been close companions, always offering a safe and soothing escape. Hail to the HDT!

Since the bits have been all used up, I am tatting with new thread (Yay!) and planning a small giveaway to thank you all for the amazing support.  It sure helped a lot! Now that I have your attention, stay tuned!!!
Posted by Fox at 7:42 AM

It is so hot here!  And no air conditioning!  Yowza!

I have to keep putting the shuttles down as the thread gets downright soggy!  Apparently it will feel like 45 degrees (with the humid-ex) this afternoon, which is about 113 Fahrenheit.

This is my offering for today, as I do not think there will be much more stitching - maybe in the hospital as it is blissfully cool there!  The coolness there is the one redeeming feature of all this. Mum is in an Isolation Room with a hug air purifying machine that makes the air-conditioning even more cool.  Ahhhh. 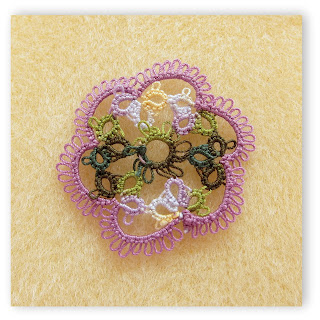 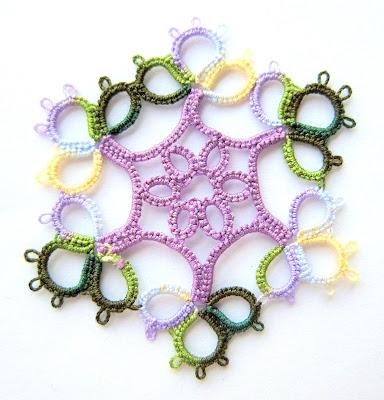 I forget where this  pattern is from - I believe from the German ‘Peacock’ book. Still using up the old thread and trying to figure out what to do next.  I think I might tackle the pansy one more time, in different colours using the pattern that is available over at InTatters.  It is an excellent re-write and easy to follow. I should take advantage of that.

You will find it by going to InTatters and typing in “pansy pattern."

At the moment I am tatting a tiny Myra Piper pattern in the last of this thread. It will be another long, hot day and I shall probably get it finished at the hospital.  Today I hope to hear the results of all the testing.

Whew... it has been a long haul.  I do so appreciate all the warm comments and the kind thoughts you send our way.  They have helped me immensely and my Mum has been surprised and touched by all the thoughts and prayers for her from tatters all over the map.  Where would we all be without dear Tat-land?

From Leftovers - A Posy 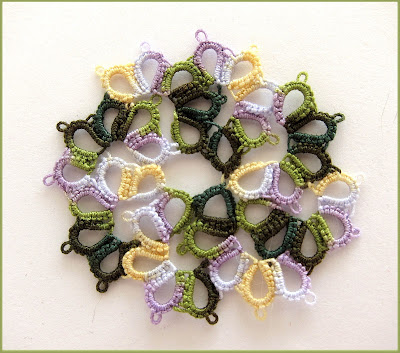 I could have actually done a larger motif, but was anxious about running out of thread, forgetting this pretty stuff is #80 - from Krystle.

Back to the hospital I go - not all is well here, as they still are not sure what is going on with my Mum. I feel so sorry for her and there is nothing to do but wait and see what happens...

I shall tat another small one in at my visit - maybe with the remainder of the #80.  Something mindless today.
Posted by Fox at 11:13 AM

Waste Not and Wonder

Yes, I do wonder about the leftover thread remaining in the bobbins I used. I don’t think I would have chosen these particular colours for this amazing design by Myra Piper.  I have tatted it a few times before and really appreciate the balance and the heft of this distinct pattern. 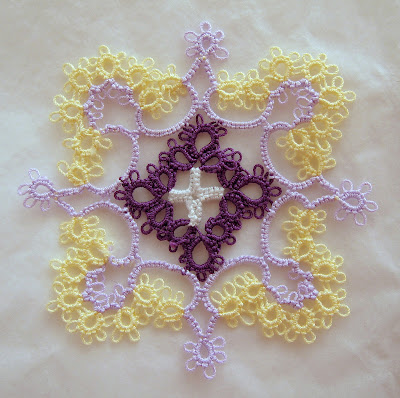 Looking back at the pink hankie I saw see that I was so eager to post that finished piece of tatting that I paid no heed to the state of the completed piece - all wrinkled and not at all worthy of top billing on my blog. I had to edit the post as soon as I noticed how bad it looked.

So, I have made a decision to scrutinize photos carefully before posting, because look at how much prettier the hankie looks after the dreaded iron emerged from its dark and usually undisturbed resting place and worked its magic: 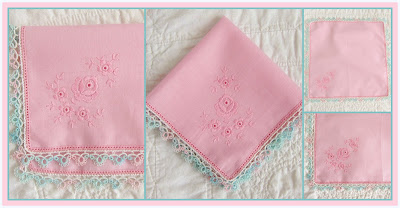 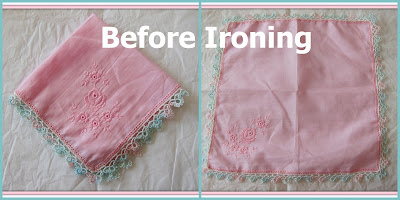 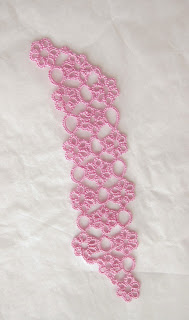 I would like to thank you all for the prayers and wishes that you sent to my mom.  Looks like she is going to get through this - slower and frailer, but still retaining most of her ability to live independently.  Good news.

Lots of time was spent last week sitting around in the hospital, so I had time to sit in a chair (gowned and masked!) and to tat, making a gazillion mistakes! I cannot tell you how many times the thread broke or had to be cut because of a counting or directional mistake.

I am not sure if the pattern is difficult or my week has been too challenging for easy tatting.